Tiny Whitefly Parasites (Encarsia formosa) lay their eggs inside developing Whitefly pupae, so a Whitefly Parasite hatches out instead of a Whitefly. You'll need a magnifier to see them, but they spell death for Greenhouse Whiteflies, and they provide some limited control of Sweet Potato Whitefly as well.

Your Whitefly Parasites arrive packaged, ready to hatch, glued to small, perforated cards which you hang among plant foliage. Parasites work best when temperatures average at least 68 F. (add daytime & nighttime temperatures and divide by 2). Parasites emerge as adults within 2 weeks and fly off to hunt for more Whitefly pupae to parasitize.

Use at least one parasite for every square foot of greenhouse space, or every 2 plants. For fastest control, make additional releases every 2 weeks for 4-10 weeks, or until 80% of whitefly nymphs are black. Check pruned leaves for parasitized (blackened) whitefly nymphs before throwing any away. Instead, leave these under plants for a week or two, to make sure parasites hatch first.

Results are best when temperatures average 68-95 F, and parasites are released soon after whiteflies get started. (Use yellow-sticky traps for monitoring.) Lower temperatures slow down parasite reproduction so

additional releases may be necessary in winter months. (This temperature range is an average - for example, it could be 60 F  at night, and 80 F daytimes, to average 70F.) If you didn't spot whiteflies till you have great flocks of them, reduce them first with a soapy spray (such as Safers). Soapy sprays can be used right up to when the parasites arrive. In fact, you can continue spraying soapy sprays on upper parts of the plants even after the parasites are used, because parasites stay mostly on the lower half of the plants, while whitefly adults prefer plant tops. Some gardeners use a vacuum cleaner to suck whiteflies out of the air - one person rustles the plants first to drive them out. Maybe you can interest the kids! By reducing the whitefly population, parasites have time and room to work.

Whiteflies nymphs resemble small white oval scales, and never move. They just sit there, right on the leaves - mostly on the bottom half of the plant, usually on the underside of leaves. After they've been parasitized, within 2 weeks they turn from their normal, clearish color to jet-black (greenhouse whitefly) or merely somewhat darker (sweet-potato whitefly). The blackened nymph "shell" remains behind, empty, after parasites hatch. By counting the percentage of nymphs that have darkened, you can see how well the parasites are doing. By the end of the first month, 15-20% of the nymphs should be turning black in color, and good control is 75-80% parasitization (typically taking 2-3 months).

Unless you look very closely, you may never actually see adult parasites, because they're quite small. It's easy to see where they've hatched, though. When a parasite hatches, it chews a tiny exit hole, 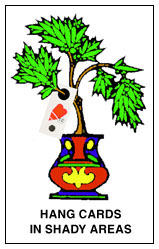 either on the front or back of the egg. Using a 16 power magnifier, examine the eggs closely. When you see the exit hole, you'll know the parasite has hatched.

Hatched parasites, over their adult life-span of about 1 week, eat some young whiteflies (nymphs), and lay their eggs into many more. This kills the whiteflies, and produces a new generation of parasites about 4 weeks later.

Open package inside the greenhouse, as some may have hatched during shipment. Parasite eggs come glued in a small circle on "cards", 100+on each one. Hang them in shady areas throughout the greenhouse. Parasites hatch within 2 weeks. 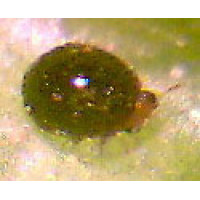 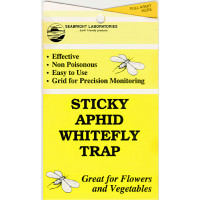