Scale insects are small insects of the order Hemiptera, suborder Sternorrhyncha. Of dramatically variable appearance and extreme sexual dimorphism, they comprise the superfamily Coccoidea. Adult females typically have soft bodies and no limbs, and are concealed underneath domed scales, extruding quantities of wax for protection. Some species are hermaphroditic, with a combined ovotestis instead of separate ovaries and testes. Males, in the species where they occur, have legs and sometimes wings, and resemble small flies. Scale insects are herbivores, piercing plant tissues with their mouthparts and remaining in one place, feeding on sap. The excess fluid they imbibe is secreted as honeydew on which sooty mold tends to grow. The insects often have a mutualistic relationship with ants, which feed on the honeydew and protect them from predators. There are about 8,000 described species.

Scale insects appeared in the Triassic, before their modern food plants, the angiosperms, had evolved; early forms probably fed on gymnosperms. They became widespread and common in the Cretaceous, and are well represented in the fossil record, usually preserved in amber where they are sometimes associated with ants. Their closest relatives are the jumping plant lice, whiteflies, phylloxera bugs and aphids. The majority of female scale insects remain in one place as adults, with newly hatched nymphs, known as "crawlers", being the only mobile life stage, apart from the short-lived males. The reproductive strategies of many species include at least some amount of asexual reproduction by parthenogenesis.

Some scale insects are serious commercial pests, notably the cottony cushion scale (Icerya purchasi) on Citrus fruit trees; they are difficult to control as the scale and waxy covering protect them effectively from contact insecticides. Some species are used for biological control of pest plants such as the prickly pear, Opuntia. Others produce commercially valuable substances including carmine and kermes dyes, and shellac lacquer. Both the red colour-names crimson and scarlet derive from kermes products.

The waxy covering of many species of scale protects their adults effectively from contact insecticides, which are only effective against the first-instar nymph stage known as the crawler. However, scales can often be controlled using horticultural oils that suffocate them, systemic pesticides that poison the sap of the host plants, or by biological control agents such as tiny parasitoid wasps and ladybirds. Insecticidal soap may also be used against scales.[19]

The first instars of most species of scale insects emerge from the egg with functional legs, and are informally called "crawlers". They immediately crawl around in search of a suitable spot to settle down and feed. In some species they delay settling down either until they are starving, or until they have been blown away by wind onto what presumably is another plant, where they may establish a new colony. There are many variations on such themes, such as scale insects that are associated with species of ants that act as herders and carry the young ones to protected sites to feed. In either case, many such species of crawlers, when they moult, lose the use of their legs if they are female, and stay put for life. Only the males retain legs, and in some species wings, and use them in seeking females. To do this they usually walk, as their ability to fly is limited, but they may get carried to new locations by the wind.[2]

Adult females of the families Margarodidae, Ortheziidae and Pseudococcidae are mobile and can move to other parts of the host plant or even adjoining plants, but the mobile period is limited to a short period between moults. Some of these overwinter in crevices in the bark or among plant litter, moving in spring to tender young growth. However, the majority of female scale insects are sedentary as adults. Their dispersal ability depends on how far a crawler can crawl before it needs to shed its skin and start feeding. There are various strategies for dealing with deciduous trees. On these, males often feed on the leaves, usually beside the veins, while females select the twigs. Where there are several generations in the year, there may be a general retreat onto the twigs as fall approaches. On branches, the underside is usually preferred as giving protection against predation and adverse weather. The solenopsis mealybug feeds on the foliage of its host in summer and the roots in winter, and large numbers of scale species feed invisibly, year-round on roots.[2]

Scale insects show a very wide range of variations in the genetics of sex determination and the modes of reproduction. Besides sexual reproduction, a number of different forms of reproductive systems are employed, including asexual reproduction by parthenogenesis. In some species, sexual and asexual populations are found in different locations, and in general, species with a wide geographic range and a diversity of plant hosts are more likely to be asexual. Large population size is hypothesized to protect an asexual population from becoming extinct, but nevertheless, parthenogenesis is uncommon among scale insects, with the most widespread generalist feeders reproducing sexually, the majority of these being pest species.[5]

Many species have the XX-XO system where the female is diploid and homogametic while the male is heterogametic and missing a sex chromosome. In some Diaspididae and Pseudococcidae, both sexes are produced from fertilized eggs but during development males eliminate the paternal genome and this system called paternal genome elimination (PGE) is found in nearly 14 scale insect families. This elimination is achieved with several variations. The commonest (known as the lecanoid system) involved deactivation of the paternal genome and elimination at the time of sperm production in males, this is seen in Pseudococcidae, Kerriidae and some Eriococcidae. In the other variant or Comstockiella system, the somatic cells have the paternal genome untouched. A third variant found in Diaspididae involves the paternal genome being completely removed at an early stage making males haploid both in somatic and germ cells even though they are formed from diploids, ie from fertilized eggs. In addition to this there is also true haplodiploidy with females born from fertilized eggs and males from unfertilized eggs. This is seen in the genus Icerya. In Parthenolecanium, males are born from unfertilized eggs but diploidy is briefly restored by fusion of haploid cleave nuclei and then one sex chromosome is lost through heterochromatinization. Females can reproduce parthenogenetically with six different variants based on whether males are entirely absent or not (obligate v. facultative parthenogenesis); the sex of fertilized v. unfertilized eggs; and based on how diploidy is restored in unfertilized eggs. The evolution of these systems are thought to be the result of intra-genomic conflict as well as possibly inter-genomic conflict with endosymbionts under varied selection pressures. The diversity of systems has made scale insects ideal models for research.[6]

Tiny (1/8") black Ladybugs, these Mealybug Destroyers (Cryptolaemus montrouzieri) are originally from Australia, and are one of the oldest and most successful of biological controls.

Application: Just shake them onto plants right from the container they arrive in. We recommend 2-5 Mealybug Destroyers per infested plant. They have large appetites for such a small insect. A few will go a long, long way.

This newest Thrips control (Orius insidiosis) also eats Mealybugs, Spider Mites and Aphids. Shipped as nymphs near hatching or adults ready to use (no choice).

Application: Use 100-2000 per acre, depending on rate of infestation.

This content is a Remix of content originally published at https://en.wikipedia.org/wiki/Scale_insect.  It is used in accordance with the Creative Commons Attribution-ShareAlike 3.0 Unported License. 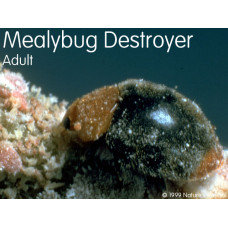